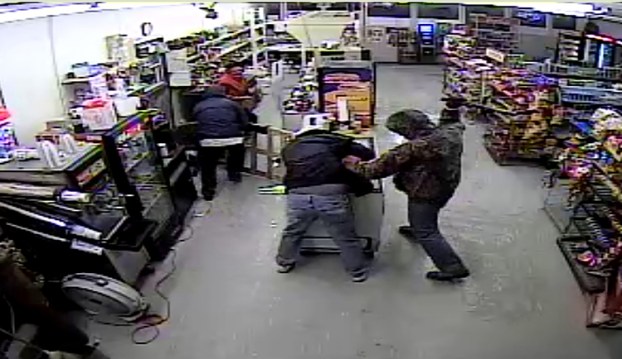 COURTESY PHOTO/Bogalusa Police Department This screenshot of the Thrifty Shop security film shows Kyle Warren attacking a middle-aged man with a pipe while Ronald Warren goes after store clerk Hal Moon on Tuesday. The Warrens’ robbery attempt was foiled, and they were later captured by authorities.

Two men were in custody Wednesday and charged with attempted murder, after allegedly beating up a convenience store clerk and a citizen Tuesday night. 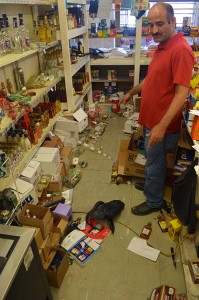 According to Detective Sgt. David Miller of the Bogalusa Police Department, Ronald Warren, 49, and his son, Kyle Warren, 25, entered the Thrifty Shop at 802 Sabine St. at around 9:30 p.m. Both men were wearing masks, and Kyle had a steel pipe.

Miller said Kyle attacked a citizen and beat the middle-aged man to the ground.

Miller declined to identify the victim out of privacy concerns.

The store clerk, who goes by the name Hal Moon, fought back, as did the citizen.

Bottles of liquor lined the shelves behind Moon, and he said he used them to defend himself.

“I grabbed two big bottles of liquor and I hit him in the face with them,” he said. “And then he ran away.”

However, the detective said the two men were unmasked during the altercation, and the clerk recognized them both.

“The store clerk knew Kyle by first name and knew the other was Kyle’s father,” Miller said.

Not only did he know the pair, but the father and son had been in the store only hours earlier looking for work, Miller said.

“Earlier in the day they went to the store looking for odd jobs. And they came back that night looking to rob them,” he said.

“They just told us they were down on their luck and needed money so they decided to rob the store,” he said.

However, Moon said he didn’t know what the men wanted. He said they didn’t say anything before attacking him and the citizen.

“They didn’t even ask us for nothing,” he said. “They just started their attack.”

Miller said after the two fled the Thrifty Store, Bogalusa police quickly went to work with deputies from the Washington Parish Sheriff’s Office to hunt down the suspects.

“We were able to close the case inside of 12 hours with the swift action of our patrol shift Captain Percy Knight’s shift last night that worked this,” Miller said. “It was swift action on their behalf to get the scene secured and get evidence collected.”

Part of that evidence was video of the two men earlier in the day, when they came into the store without masks.

Miller said police worked with the deputies, who were key in cracking the case.

“The sheriff’s office was familiar with (the Warrens), and they were able to give me names, front and back names,” Miller said.

Miller said the two men were arrested at a house on Avenue L, just outside the city limits, and within 12 hours after the incident, the case was closed.

“I want the public to know our agency and the sheriff’s office work together,” said Miller. “We share information and it was the sharing of that intelligence between the two agencies that brought the closure to this case as quickly as it did.”

Both men were in the city jail Wednesday afternoon, before they were transferred to the parish jail. Miller said both men are charged with attempted first-degree murder and armed robbery.

Miller said the citizen was sent to the hospital.

“The citizen went to the hospital and was treated,” said Miller. “He has some severe head injury. I don’t know the extent of his head injury but he is alive.”

Wednesday at the Thrifty Shop, bottles of Jose Cuervo tequila, Malibu and Bacardi rums still lay askew on the shelf. Glass still littered the floor behind the counter, evidence of Moon’s struggle, while off to the side the counter, spatters of dull red, dried blood were smeared across the tiles. But, otherwise, life at the store is back to normal. The doors were open and customers came and went.

Moon said he is doing all right, and he is happy both men were caught and are in jail.

Thrifty Store owner Sam Kaid said this is the first time in the six years he’s owned the store there has been a robbery attempt.

Kaid said he is not fearful of more attacks.

He said most of his customers are good people, and he tries to help those he can.

“If people come in here and they’re hungry, I give them free food,” he said.

However, he added he has no patience with would-be robbers.

“I am not worried. If I see someone else, I’ll kill them,” he said. “I’ll shoot them in the head. I have kids to support.”

Kaid said people should work for their money, instead of trying to steal his.

“People all over the world, they wish to come here to work,” he said. “You should work. There are jobs all over.”