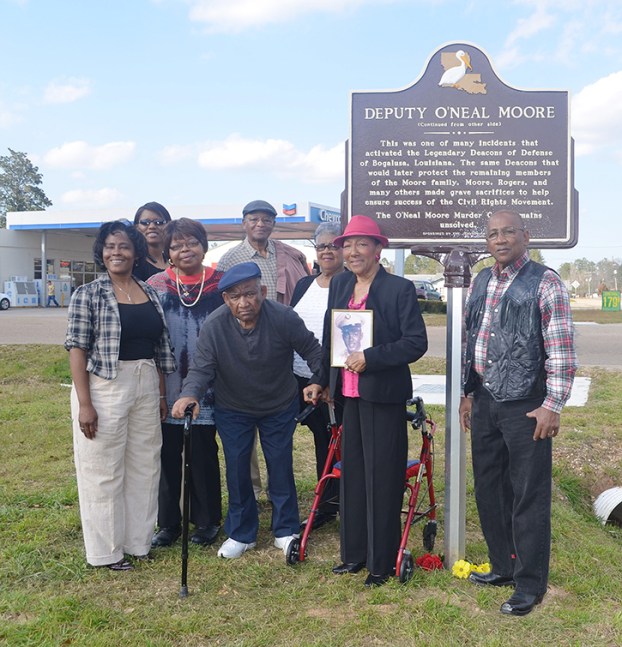 DAILY NEWS PHOTO/Justin Schuver Maevella N. Moore, the widow of the late Sheriff’s Deputy Oneal Moore, holds a portrait of her husband while standing next to the historical marker that was recently placed in his memory.

The marker is located near the spot where Moore was murdered on June 2, 1965. He was on patrol with his partner, Deputy David “Creel” Rogers, when the pair was ambushed and shot by unknown assailants. Moore was killed and Rogers was injured; the case remains unsolved.

Moore was one of the first two black deputies in the Washington Parish Sheriff’s Office. The marker was placed in late January.

“(The murder was) a sad occasion, but I’m very touched by the gesture,” she said.

Moore noted that Andre Johnson, the former Washington Parish Council member from District 4, was instrumental in making the marker a reality.

“He was always trying to work on something to really honor my family,” she said.

Johnson’s wife, Presious Johnson, said that her husband was very proud to be involved.

“He has been a family friend of the Oneal Moore family for years, and was honored to be a part of this process,” she said.

“I think it’s great for the community and for the entire parish,” Lewis said. “I appreciate the previous council member (Andre Johnson) for realizing the need to recognize the sacrifice of Brother Moore and his family.

“We hope that this memorial will serve as a reminder that such incidents will never be repeated. I look forward to doing much more in the coming years to honor the name of the Moore family for their contributions to the civil rights movement and our area’s history.”

On June 2, 2015, 50 years after Moore’s murder, he was honored by Sheriff Randy Seal in a memorial service at the Washington Parish Sheriff’s Office. On that day, Maevella Moore and Seal placed a wreath next to the bronze relief plaque of Moore in the office’s lobby.

Moore was a U.S. Army veteran and had served with the Washington Parish Sheriff’s Office for a year at the time of his death. He was 34 years old, and was survived by his wife and four young daughters.