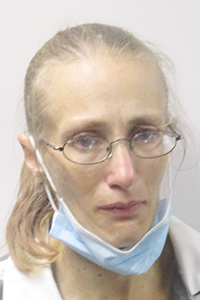 A Mt. Hermon woman was recently arrested on drug-related charges for the second time this year, according to Chief Deputy Mike Haley of the Washington Parish Sheriff’s Office.

Haley said that WPSO Deputy Kyle Stogner was patrolling on Louisiana Highway 21 north of Bogalusa on Tuesday, when he spotted a vehicle with no license plate. He initiated a traffic stop and, when he approached the vehicle, smelled a strong odor of marijuana, Haley said.

The driver, Erin Fisher, 37, a resident of D. Wascom Road in Mt. Hermon, was reportedly in possession of marijuana, methamphetamine and drug paraphernalia. She was arrested and transported to the Washington Parish Jail, where she was booked on the drug charges plus not having a license plate.