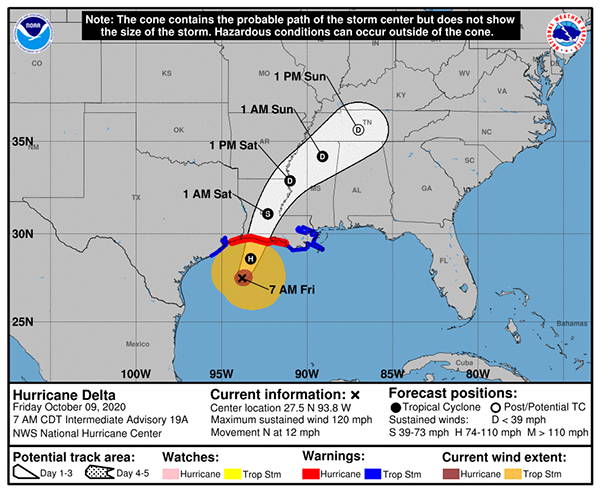 Hurricane Delta was expected to hit Louisiana sometime between this Friday and Saturday, and local officials urged Washington Parish residents to take caution and prepare.

Thursday afternoon, officials with the Washington Parish Office of Homeland Security and Emergency Preparedness said that the storm could bring heavy wind and rain through the weekend.

The parish was under a tropical storm watch at the time. In Friday’s forecast, there was a potential for 20 to 30 mph winds, with gusts up to 39 to 57 mph, officials said.

“Generally, there is the potential for two to four inches of rain, with the most occurring Friday through Friday night, with higher amounts possible,” officials said on the agency’s Facebook page. “Localized flooding rain and tornadoes from Friday through Saturday morning can not be ruled out.”

The National Weather Service in New Orleans suggested that residents should “plan for hazardous wind of equivalent tropical storm force.”

There is also the potential for localized flooding from heavy rain, NWS officials said.

The NWS forecast for Bogalusa included the following, as of Thursday afternoon:

Parish residents had already begun to prepare by Thursday. Sandbag locations were open throughout the day at multiple locations throughout the parish, but they were not scheduled to be open any other days.