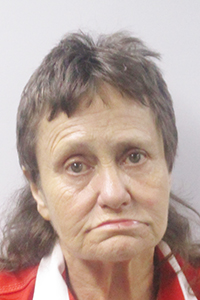 A Bogalusa woman was arrested on drug-possession charges Tuesday after a traffic stop, according to Chief Deputy Mike Haley of the Washington Parish Sheriff’s Office.

Haley said that WPSO detectives Raymond Myers and Chad Cassard were traveling south on Sullivan Drive in Bogalusa on Tuesday, when they observed a vehicle with an expired license tag being driven in a careless manner. After a short pursuit, the vehicle finally stopped on Highway 21 near the former Furey automobile dealership, Haley said. The driver was issued a citation for an expired license plate and improper lane use.

One of the passengers was arrested, Haley said. Tammy L. Ramp, 59, who gave her address as Highway 60 west of Bogalusa, was reportedly found to be in possession of heroin. She was transported to the Washington Parish Jail where she was booked on charges of possession of heroin and possession of drug paraphernalia. Her bond was set at $3,500.

Haley said that Ramp has a previous arrest in Washington Parish. In September of 2013, she was arrested and jailed on charges of driving while intoxicated and possession of illegal drugs.

“The possession of heroin is an indication of a more serious problem and any amount of heroin in our parish is always a threat to everyone,” Washington Parish Sheriff Randy Seal said. “Great job, detectives!”