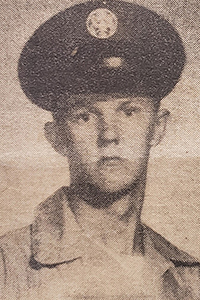 This newspaper photo shows Mixon shortly after he received his assignment for Air Force training.

Bogalusa Rebirth would like to proudly announce the winner of its $30,000 Affordable Housing for Rural Veterans grant. We would like to salute all veterans and service members for their dedication and service to our country.

Robert W. Mixon Sr., a U.S. Air Force veteran from Bogalusa, will receive a rehabilitation to his home to include an ADA bathroom remodel to accommodate the needs of him and his family.

Mixon is 78 years old. Three days following his 18th birthday, he joined the U.S. Air Force. A3C Mixon was assigned to 818th Air Division (Strategic Air Command), 818th Combat Defense Squadron (CDS), 818th Combat Support Group (CSG), SAC, Lincoln Air Force Base, Nebraska. He served his country from Aug. 30, 1960, to Aug. 29, 1966. Throughout his service, Mixon was assigned to the military Air Police (AP). His primary duty was to act as police patrol and security daily for up to and no more than four B52 Bombers equipped with nuclear bombs on standby/alert. His additional duties included base security and police patrol for all areas and military police matters associated with Lincoln A.F. Base.

Mixon has two children who are veterans and one grandson — Robin L. Mixon, Army veteran, CW3, Retired; Robert W. Mixon Jr., Army veteran; and Brandyn Cooper, Air Force veteran. His only grandson, Brandyn, followed in his grandfather’s footsteps while serving as a Crew Chief assigned to B52 Bombers while serving in the USAF, Minot AF Base, North Dakota.

This grant was possible through The Housing Assistance Council (HAC), in partnership with The Home Depot Foundation, JPMorgan Chase & Co., and the Wells Fargo Housing Foundation, who has created the Affordable Housing for Rural Veterans (AHRV) initiative to provide rural organizations with the technical assistance, training, information, and financial resources they need to improve their ability to serve veterans.

Veterans of the United States military services put their lives in danger to protect their country and its citizens. However, when they return home they are not always able to find housing and access to services in their communities.

Bogalusa Rebirth applied and was the recipient of the grant to pass down to a worthy veteran in our community. We are pleased to award this grant to Mr. Robert Mixon, and thank him and his family for their service.

This article was written by Wendy Williams Dupont, the executive director of Bogalusa Rebirth.