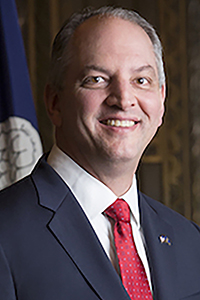 On Thursday, Gov. John Bel Edwards and International Paper Bogalusa Mill Manager Bernie Chascin announced the company plans to invest up to $52.2 million in capital to increase the efficiency of the mill, which has been a manufacturing mainstay of Washington Parish for more than a century.

Through the project, International Paper plans to retain the mill’s 492 direct jobs that provide an average annual salary of more than $86,000, plus benefits. In Bogalusa, IP operates a paper mill and an associated corrugated box plant. The modernization program would enhance the paper mill’s efficiency by upgrading the recovery boiler system, along with filtration, condenser and acid system enhancements in the papermaking process.

“We congratulate International Paper for improving the competitiveness of its Bogalusa Mill and for investing in the future of IP employees in Louisiana,” Edwards said. “This commitment to Bogalusa and Washington Parish represents a significant project win for our entire state and reinforces the great strength of Louisiana’s forest products sector.”

The latest project plan would bring International Paper’s investment in capital upgrades at the Bogalusa Mill to $487 million since the company purchased the Washington Parish site in a 2012 acquisition of Temple-Inland Inc.

“Our planned investment represents the mill’s ongoing focus on maintaining safe and reliable operations, producing essential products that meet the needs of our customers and providing good jobs to the region,” said Chascin, the Bogalusa Mill manager. “We are grateful for the support of Louisiana leaders and our community partners who play an important role in our success. The plentiful fiber resources and hardworking people of Louisiana have made doing business here a worthwhile investment for over a century, and that is why we continue to invest today.”

Since making an initial $44 million capital investment in crane and wood-chipping technology in 2012, International Paper has increased the number of direct employees in its Bogalusa workforce from 411 to 492, a nearly 20 percent gain.

“We are fortunate to have International Paper — one of the world’s leading producers of renewable, fiber-based packaging, pulp and paper — as an industrial citizen in Washington Parish,” Washington Parish President Richard “Ned” Thomas Jr. said. “International Paper’s forward-thinking vision for modernization is the reason they have remained stalwarts in our community. Their continued commitment to investing in upgrades has allowed the competitive production necessary to maintain a stabilized workforce.

“The economic impact of International Paper is very important not just to the City of Bogalusa but to the livelihood of our parish. Additionally and just as important as their economic impact is the generosity of their employee-giving, which has always played a key role in the fabric of the progress and well-being of our community.”

Louisiana Economic Development began formal discussions about the Bogalusa Mill project plan with International Paper in March of 2020. To secure the project, the State of Louisiana offered an incentive package that includes a $500,000 Modernization Tax Credit, and the company also is expected to utilize the Industrial Tax Exemption Program.

“Upon hearing the news of International Paper’s plans to invest millions of dollars into the mill and into our community, I was elated,” Bogalusa Mayor Wendy Perrette said. “This is a significant reinvestment by International Paper that will affect the lives of every citizen in the City of Bogalusa. By securing nearly 500 jobs, we look forward to the economic prosperity this investment will bring to our community for many years to come.”

“International Paper is a critical economic driver for our parish and the most vital manufacturing presence in our community,” said Ryan Seal, executive director of the Washington Economic Development Foundation. “We were delighted to work with the company and our state and regional partners to secure not only IP’s presence in Bogalusa, but also to heighten its performance and to preserve this great industrial asset for future generations.”

“This announcement ensures that International Paper will remain a world-class facility and a leading employer for Washington Parish,” said President and CEO Michael Hecht of Greater New Orleans Inc. “While the company has been a significant force in the community for years, the production efficiency increases created by these upgrades will pave the way for an even brighter future. It’s great to know that the economic strength of Bogalusa will remain in good hands.”