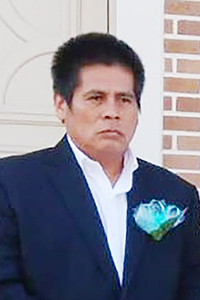 Pedro Martinez Garcia was a member of the Catholic Church. He was born and raised in Tejupilco, Mexico.

At the age of 16, Pedro immigrated to the state of Texas in search of a better life.

In 1999, he returned to Mexico where he married Marina Cruz Reyes. He then conceived four wonderful children who he would do anything for.

Pedro asked the Lord to grant him the blessing of bringing his family to the United States of America. Pedro’s greatest devotion was to provide, protect, educate, and most importantly, love his family.

Pedro would wake up every morning and put on his work clothes and his work boots. He would always say, “I have to go out and do something. I can’t just sit around doing nothing.”

Pedro was an outstanding old-fashioned father, husband, and son. Everybody that knew him knows that he was truly a trust worthy outgoing and friendly guy.

He was preceded in death by his father, Felipe Martinez.

Graveside service will be on Saturday, Jan. 23, at 1 p.m. at Ponemah Cemetery with the Rev. Father Daniel Brouillette, pastor, officiating.

Crain and Sons Funeral Home of Bogalusa is in charge of arrangements. Sign the guestbook online at www.crainandsons.com.