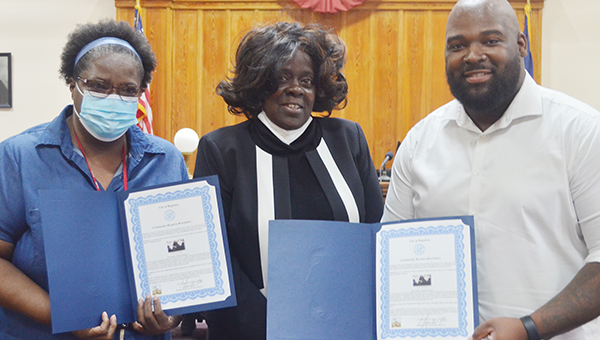 The reunion’s success was marked with a City of Bogalusa Resolution, which was read by Bogalusa City Council member Gloria Kates at the council’s Tuesday, July 6, meeting. The resolution is as follows:

“Whereas, the City of Bogalusa expresses deep gratitude and respect in the celebration of the Poplas Quarters Family Reunions organized by citizen Crista Owens O’Ree and staff. On this day, I give tribute in her sustained and outstanding civic duty in fulfilling her long-term dream;

“Whereas, as researched by citizen Wanderlyn Weary, we give tribute to the founder and legend of Poplas Quarters:

“In 1913, a group of people would meet at the home (517 Bayer St.) of Georgia Poplas for a prayer meeting. The purpose of these meetings was to organize an A.M.E. church. Georgia Poplas was the daughter of Mitchell and Fannie Bailey. She married Paul Poplas — no children were born to this union, but they raised Hazel Bolton Jones as their own, from infancy to young adulthood. Paul and Georgia Poplas were the first settlers of Poplas Quarters, and;

“Whereas, this is how Poplas Street, Poplas Elementary and Poplas Quarters got their name, and;

“Now, therefore, be it resolved, I, Gloria W. Kates, Councilwoman of the City of Bogalusa District A, do hereby issue a Community Reunion Resolution in Recognition of the honor of the Organizers and Families of the Poplas Quarters Reunion Celebration in the city of Bogalusa.”

The resolution was originally presented on Sunday, July 4.