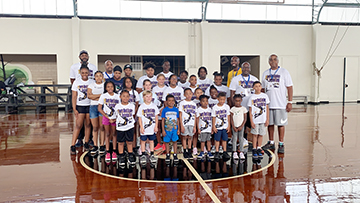 COURTESY PHOTO/Teresa Galloway Pictured are participants and coaches at the 2021 Sports Work Academy Basketball Camp that took place on Saturday at the YMCA.

SWA Camp successful in its return

The Sports Work Academy Basketball returned to the YMCA after taking last year off because of the COVID-19 pandemic and co-Camp Director Michael Galloway said it was very successful.

“It was one of my best camps I’ve ever had,” Galloway said. “We had a lot of community support and we had several parents hang around to watch the camp. I can’t wait to do it again. I’m so excited. I was pleased with how many calls I got about the camp and I appreciate those who helped put the word out.”

Galloway, who is a 1985 Bogalusa High School graduate, is a former all-district performer for the Lumberjacks. Wilson is a former LSU player and was drafted by the Portland Trailblazers in 1987 with seventh pick of the second round (30th overall).

This was the 14th time they have held the clinic.

Galloway said they had 28 participants in ages 6-18.

Campers were separated into two groups — 13-older and 12-younger.

Only Basketball Elite’s O’Brian Calahan worked with the younger participants first and took them through some combine drills like the ladder drill.

The campers also worked on closing out defensively, the stance and movement.

Wilson worked with the participants on offensive skills such as dribbling through cones to help with ball handling, mid-range jumpers and rebounding techniques.

Each coach spoke to the participants and gave out awards.

“What made this camp very special was that my 8-year daughter was able to fly in from Atlanta to do the camp,” Michael Galloway said. “Also, my dad came in and opened us up with a prayer. This is the first year in 14 years he was able to attend the camp. I’m on cloud nine.” 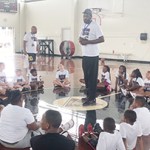 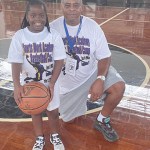 COURTESY PHOTO/Teresa Galloway
Co-Camp Director Michael Galloway is pictured with his eight-year old daughter Morgan, who was able to attend the camp this year.