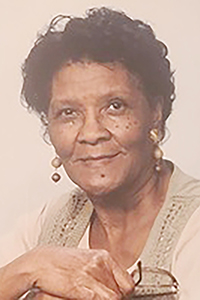 “The days of our years are threescore years and ten; and if by reason of strength they be fourscore years, yet is their strength labour and sorrow; for it is soon cut off, and we fly away” (Psalms 90:10 KJV).

Willean Nelson Weary, 90, was born on March 3, 1931, to the late William “Dank” Nelson and Nealie Foster Nelson. She peacefully transitioned from this life from her home on Sunday, July 18, 2021.

Willean grew up in Angie, and attended grade and high school at Wesley Ray. She took pride in sharing that she was a member of the Wesley Ray High School 1945 -1946 Girls’ Sweet Sixteen State Championship Basketball Team. Though she worked other jobs, Willean was a certified nursing assistant and worked as a restorative aide for over 25 years until her retirement.

At an early age, Willean joined Wesley Ray United Methodist Church. After relocating to Milwaukee, Wis., in the 70s, she attended Mt. Carmel MBC and remained there until her return to Angie in 1995. Returning home, she reunited with Wesley Ray UMC and became actively involved in the United Methodist Women, the Senior Mission, and the Communion Stewards. She remained faithful to these ministries until the end.

Willean enjoyed reading her Bible and demonstrating love and concern for other people. She did not have a formal education but was passionate about learning. As a result of her desire for learning, she wanted her children and grandchildren to succeed. Her favorite pastime was talking on the phone with her children and grandchildren, whom she loved dearly. Until her health began to fail, she enjoyed cooking, gardening, fishing, crabbing, visiting other community churches, participating in church and community events, visiting the elderly in the community, and attending the Angie Senior Citizen Center.

In addition to her devotion to Christian work, Willean had a high regard for civic duty. She took pride in voting and seldom missed a major local, state, or national election. In fact, she voted in person each time until this last local election when she was no longer able to attend. Refusing to be defeated by her condition, she voted absentee.

Willean Nelson Weary lived a full life. She will be missed by her family, friends and community.

There will be a drive-by viewing at Crain and Sons Funeral Home in Bogalusa on Sunday, July 25, from 1 p.m. until 3 p.m. The funeral will be at Wesley Ray UMC in Angie on Monday, July 26, at 2 p.m., with Pastor Terrance August officiating.

Crain and Sons Funeral Home of Bogalusa is in charge of arrangements. Sign the guestbook online at www.crainandsons.com.