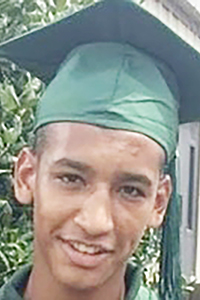 Typolia “Junior” Peters Jr. was born on May 7, 2000, to Typolia Sr. and Tina Peters in Covington.

Typolia attended Bogalusa High School, and his passions were crabbing, fishing and enjoying his family. He loved to ride his dirt bike and make people smile.

Typolia aspired to own his own construction company one day. He loved working with his hands.

He will be missed by the many people whose lives he touched on his journey.

A drive-through visitation will be held on Friday, Aug. 20, from 4 p.m. until 6 p.m. at Crain and Sons Funeral Home in Bogalusa.

The funeral service will be on Saturday, Aug. 21, at 1 p.m. at Crain and Sons Funeral Home in Bogalusa. Interment will be held at Live Oak Cemetery in Angie.

Crain and Sons Funeral Home of Bogalusa are in charge of arrangements. Sign the guestbook online at www.crainandsons.com.