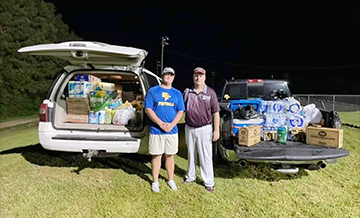 Wilkinson County Christian Academy hosted a drive to help those affected from Hurricane Ida and sent two truckloads back with Ben’s Ford Christian School, who they played in football on Sept. 3.

Holloway said a group of parents came up with the idea.

“We really didn’t know how hard they had been hit, but we knew they could get the supplies into people’s hands that needed it,” Holloway said. “It’s something we do for our sister schools. We help out when we can.”

“We’re Christian schools.” Holloway said. “It’s our Christian belief to give to others when we can. A hand that gives always gets a hand in return eventually.”

Ben’s Ford Christian School coach Destin Pittman said that WCCA called them and said they were going to do something for them, but Pittman said it was more than they expected.

“They told us they started collecting stuff the week the storm happened, and in a matter of two days, they collected three carloads of food, water and supplies,” Pittman said. “We’re just extremely thankful and blessed they did this for us.”