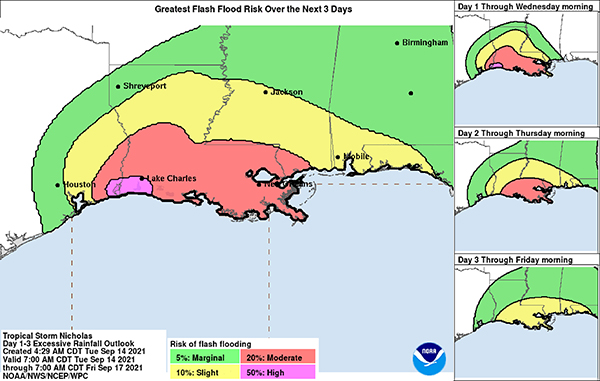 A projected model shows much of Washington Parish under a “moderate” risk of flash flooding over the next three days, as Tropical Storm Nicholas travels across land (Courtesy graphic by National Weather Service).

Tropical Storm Nicholas is expected to bring heavy rain to Washington Parish over the next several days, according to forecasts from the National Weather Service.

A flash flood watch for the parish was issued Tuesday at 7 a.m. and will remain in effect through Thursday morning.

According to the NWS, widespread rainfall of four to six inches is expected north of the Interstate 10/12 corridor, and five to 10 inches south of the corridor. Isolated higher amounts are also possible.

NWS officials said that rainfall rates would be “efficient, producing very heavy rainfall over short periods which could quickly lead to drainage problems.”

As of Tuesday afternoon, the heaviest rainfall was forecast to occur from Tuesday through Wednesday.

The NWS forecast for Bogalusa was as follows: